I arrived in Aarhus a week before the official competition and met and trained with New Zealand kiwis Kerian Hibbs and Darrell Cottle. One of these days Darrell told me about Kerian's monofin technique where he includes an armstroke between each kick&glide.
Now - that is interesting, I thought! During training back home I tried that a couple of times and kind of liked it, apart from the fact that people were laughing at me. ;-) But here in Aarhus I played a little more with it, liked it even more (knowing that a 200m+ guy uses it) and decided to use it during my dynamic dive later on. This experimenting worked great for me, it took the tension a bit of and things started to be fun.

The whole experience of such a well organized event is great anway! So many legendary freedivers that I felt really humble. After a while everyone appears to be really nice and I felt myself a bit more nice too. The best thing surely is that my whole perception of what long times or distances are completely gets reset when you are so much part of things. Hearing how and how intense others train gives a great respect for that. It's a bit like new years day where most walk away with good intentions and some might even make changes for the better. Being part of this also gives a greater understanding of the dynamics of a multiday competition. The nerves, expectations, results of teammates, importance of sleep - everything is so much more intense, glowing, even exploding during the finals.

My goals, my perfect competition, would be to get in the b-final with nofins, a-final with static and a dutch national record (>150m) with dynamic. I did not think about the performances I wanted to do in those finals, just getting there was the goal. I achieved two out of three of those goals.

I will write little about my teammates here because they have or will write their own reports. They all did great performances but there was also some foolishness and bad luck going on. 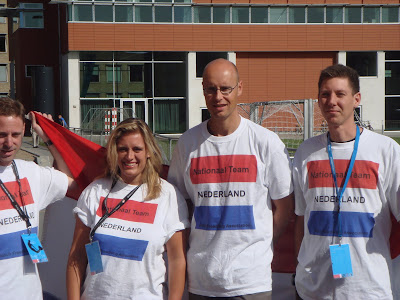 Team NL: Erik Skoda, Nanja van den Broek, me, Arjen Costerus.
They had a 'long' drive from The Netherlands to Denmark and we were happy to have them over to our rented house to have so good old pasta with salmon.

Sunday
Greena aquarium freediving
Teammate Erik was having the first day of his course to become an international freedive judge. Nanja, Arjen and I had a two our swim with big fish, small sharks and huge eels. The salt-water aquarium was about 5 meters deep and we had not enough weights with us by a long shot. It was fun, relaxed and good training. Most of the session we were doing empty lung swims. :-) The sharks were not at all as impressive as we hoped. There was also another aquarium there with the bigger sharks. This is what we really came for, but we were not allowed in there! I was glad that the man from the aquarium did not bend for Nanja's charmes!

We spend an hour in another pool in Aarhus to train. But not for me, I needed to rest.

I did a few laps with my monofin, met up with Ulf Dextegen. I also helped Nanja a bit with DNF technique and proper weighting.

Tuesday
Parading through the streets of Aarhus 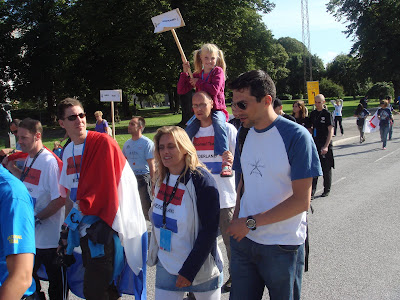 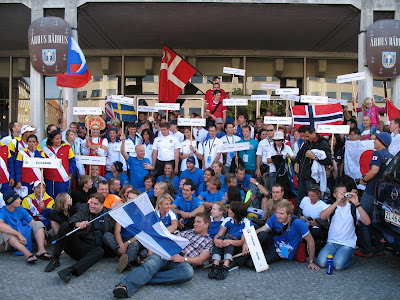 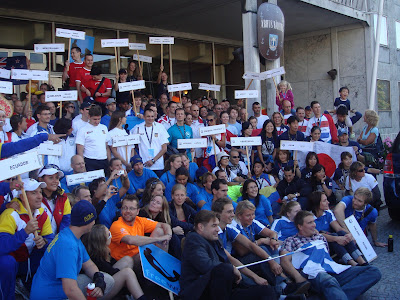 Wednesday
DNF qualification heats
This was the first time that my family came to watch me. I was a little nervous but most of all I wanted to not have a blackout. Because my family already saw a handful of those the first few minutes they arrived.

My first goal was achieved, 145 meters, on the one hand I was happy and very satisfied with that and on the other hand I knew I could have swum a few more meters. At the end of the video you can hear me say that I held back. It looks a bit arrogant now that I look back at this, a bit to calculated too, maybe. But my first swim at such a major competition was done and I did what I came for - good!

I couldn't get a smile on my face this day. At the beginning of the video you can see me trying to smile but what came out was something that only The Joker from the latest Batman movie would have been happy with. I think I had put to much pressure on myself for static this time. After 5:35 I aborted the hold, a far cry from the 8:01 I did earlier this year. It just happened and I was pretty upset about it for a while. A bit angry at myself!

DNF finals
A few minutes before official top, my good friend Danny Martherus arrived with his two children to watch the dutch team and be part of this adventure. This made me very happy and with them in our extended family the next few days were a lot more fun! Thank you Danny!

I was in the b-final but after just 80 meters I stopped swimming because I wanted to surface. I told myself I would not be happy with that. After a few more meters swimming I made a decision (it did not just happen like with static) to surface because I was not having fun. This actually made me satisfied because I did this for myself.

Friday
STA finals
Static finals was exciting to watch. Very close silver and bronze medals (within 5 seconds, at around 8:30) for Alexey Molchanova and Ulf Dextegen. The coach of Alexey was making a bit of a mess of things by first going through the competition zones 30 seconde before official top. She swam over the heels of athletes in full concentration :-(. At the end of Alexeys performance she kept her hand to long on his shoulder when he was surfacing. This resulted in a red card. They protested and won that protest because it was not visible on the official camera. Now at this point Ulf or the current no. 4 could/should have protested with their own video material so Alexey got silver. It's a stupid rule, but as long as it is in existance it should be followed obviously. Guy Brew continued for another 15 seconds, surfaced and did a surface protocol that seemed to be in slow motion but was still in zero seconds flat. The funny thing is that these three guys just did a performance under big pressure that I did never even did when fully relaxed but only the surfacing of Guy impresses me. It's not just the excellent times and distances that got recalibrated in my head, it's the different ways to approach freediving that make for a fresh wind in my mind.

DYN qualifications
Now this was going to be fun! My heart is with static (and DNF) but my focus for the last couple of months has been with dynamic.

I apologize for the quality of the next movie. Photo camera's should have better lenses and a higher resolution when used for filming. (and they should be waterproof to at least 100 meters but that's another story)

This was the third and last dutch pool record that I did not improve (have/own a record sounds strange, doesn't it?). And I really really wanted it. I've tried in a few smaller competitions before but the fact that I new I could made the pressure to big or not fun anymore. Not this time. The evening before I cleaned the slate with training tables symbolically and I wrote 'swim!' instead. Nothing more, nothing less, the dive was great I was fully concentrated on what I was doing or on my next stroke at the most, I was not tensing up when I reached 150. I had no ambition to swim much further to try for a b-final (surfaced at 158 meters). I was not looking forward nor back at the previous day, I was just doing it. Freediving is nice!

Saturday
DYN finals, award ceremony, party time!
Sorry wasn't there. You have to find other reports to read about freedivers getting drunk after one beer like a 16 year old. I did hear Arjen over my carstereo on the way back home. He phoned in exciting realtime reports of the finals. I wished I could have recorded it. The life reports during the competition were great but if we ever need someone else to do that job I would gladly nominate Arjen!

Thank you family
Thank you teammates
Thank you safeties
Thank you organization
Thank you big old body full of lungs
Thank you mind for not going crazy just yet
And thank you all for inspiration!

[P.S. for people with a facebook account - more pictures can be seen here]
Posted by Eric van Riet Paap at 9:08 AM