You gotta go your own way 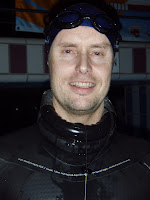 Finding out what my own thing - that what works for me - is, is the hard part. Training is easy... well...

The last couple of months were interesting but not per se the most enjoyable freedive experience for me. The first two years of my freediving I felt very much like a beginner, wherever I went something new and magic was to be learned. I was aware that I wanted this beginner attitude to last forever. But as in any relationship things are always changing, evolving. Some part of my relation with freediving had changed without me noticing.

Looking back at the period after the Dutch Apnea Open competition of last november I see that my attitude of 'have fun, see where it gets me' made way for more ambition. Of course I wanted to go to the world cup and do well, but I didn't notice that the 'let's see where it gets me' vanished. For the first time I also became a copycat. Being a bit jealous :-) of a certain someone's even faster improvements in static than my own (you know who you are!) I tried to mimic his way of doing things. That process is usually called learning but after some time it became clear that my own methods work better for me at this point. Instead of taking out the good bits I kept trying and became frustrated. Now, frustration is an excellent way to kill enthusiasm. So... I became.. even more frustrated. Alternating 4+ with 7+ statics regularly. Motivation was not good enough (I must say I also didn't sleep very well so that was a factor too) for steady progress.

It must not always be nice for fellow freedivers to see me progress fast, sorry 'bout that. (just kidding :-/ )

Yesterday I finally had enough, took out the torpedy shaped fun machine (no not that one! ;-) ). This one that I won during a lottery. And I drove of to Haarlem for some serious fun training. As it turned out it was the first time the underwater scooter took me over 200 meters.